My name is Camila, and I am from Ecuador.

I have lived in La Mitad del Mundo for 12 years now, and my first memory of the area is a clear picture of Catequilla. Catequilla could be considered a hill, but it is big and takes about 1 hour and 20 minutes to reach the top by walk. The climate had always been like a desert since I lived here. However, some people have told me about the “true” weather of the area and have even shown me photos to check their points, and I have the image in my head of an old photograph of Catequilla and comparing it with its current state is somehow depressing.

La Mitad del Mundo area has been a place of extraction construction materials for decades, and it was not until 2010 that many of them closed because the city was approaching the area. Some people saw no problem in having these places to extract materials, but the consequences and the great change that the region underwent it is somewhat disconcerting.

I believe that thoughtful little actions do more than great attitudes without real purpose. And, I mention this to show several examples with this hill. As shown in the image, the mountain is perforated and does not have plenty of vegetation on top. The climate does not allow certain plants to grow during the summer, but during the winter it is green, and the place is 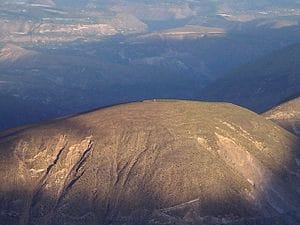 completely transformed. Anyway, during the inauguration of the “Néstor Kirchner” edifice, where once was UNASUR, a gigantic mistake was made. They placed the slogan of the Ministry of Tourism over Catequilla. A great “Ecuador loves life” crowned the hill showing the unconcern of the organizers towards the comments of the press. It was a very inconsiderate decision for the people who have lived for years in the area enduring the dust of the quarries and the constant passage of machinery. Until today, there is a vestige of the letters, and I cannot stop thinking about how irresponsible our government was to place that phrase since it was a large-scale international event.

After criticism and ridicule, the government promoted a nationwide campaign to reforest certain areas of the country, among them Catequilla was selected. As I recall, A Guinness Record recognized Ecuador for the largest number of people planting trees in a single day. It was celebrated a lot for several months, however, as a resident and a student, I had to watch those trees die. During the volunteer hours that you must do, our high school decided we would water and try helping those trees. We failed at all. After a month, no trees had survived, and only branches were left that prevented certain native shrubs from the area from growing. La Mitad del Mundo sun had washed away each one of them.

I don’t think that reforestation campaigns are bad, but I think that hoping that just planting trees will fix something is a mistake. It is easy to place the seed, but maintaining consistency in its care is what makes it complex. Sometimes you have to accept that we have damaged certain natural areas and that change can be achieved only with small, thoughtful actions.