My special place is situated in Brazil, it’s a huge island called Florianopolis, also known as Floripa. it is a beautiful place because it’s a mixture of beach, forest, desert, mountains, and lake, that lives in harmony with city inside the island. When I was in Brazil I heard about the fires in the Amazon, when I was there actually saw the smoke that came from the Amazon. it made me feel fearful that a place like Florianopolis could be affected by deforestation, these deforestations occur mostly so corporations can get access to land cows will be put on.

I have always thought that the main cause for deforestation was to get access to wood, but actually the meat industry is the one of the biggest reasons for this environmental disaster occurring in South America. I was also concerned about hearing that the major creeping motion creating artificial beaches, this would bring in more tourists that could impact the wildlife on the island, Bruce could be immensely affected by this other type of deforestation. When I travel there, I saw there were many, more than I have ever seen in Quito, and of many shapes and colors. I can’t imagine how terrifying it would be for them to lose their homes.

I remember that while I was walking in the beach along the houses and trees, I suddenly stumble into these huge amounts of sand, it caught my eye by surprise, so I decided to climb this Hill of sand. when I got to the top, I saw huge desert, the hidden desert, it was one of the most beautiful sights I’ve seen in my life. forget again, I saw I talked to a native from that place, he told me that they were planning on building houses in this place.

The worst of all, is that as these businesses keep destroying these environments, they take away from could actually be an opportunity to incorporate this kind of nature into the city. as someone who likes to travel, it was the mixture of urban cement, and this kind of wildlife that makes this place my favorite place on earth. it is way more beautiful than the biggest cathedrals in Rome, and the biggest buildings San Francisco.

That is why I decided to make this digital alteration off a picture I took from the hidden desert that I found in this beautiful island. 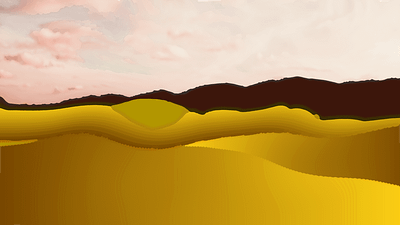