In the cities we can find different flora and fauna that coexist with us. Normally this flora and fauna are call invasive, but who is invading who? Plants and animals where long before us and now we call the invasive. And even trying to get rid of them, they managed to survive and adapt to the city.

Around my house I started searching about “invasive” species and I found some of them. First, I encountered Ants. Ants act as decomposers b

y feeding on organic waste, insects, or other dead animals. They help keep the environment clean. They clean everything humans throw in the floor, but when streets are clean, they decide to go into houses to get some delicious meals. 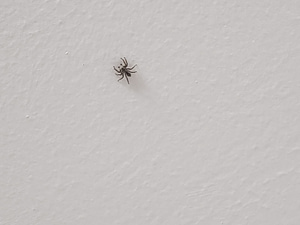 Then, while walking around my house, I looked up and found a little spider. This spider is called plexippus paykulli and is normally associated to houses and buildings. The do not make spiderweb, they build a silky shelter in an elevated position, such as the edge of the roof, from which it makes hunting forays. They are predators of mosquitoes in and of insect pests. They are capable of successfully killing prey twice their size. And the best part is that they are inoffensive to humans, their bite is not strong enough to make any damage to us. They are a good partner if you do not like plagues in your house. 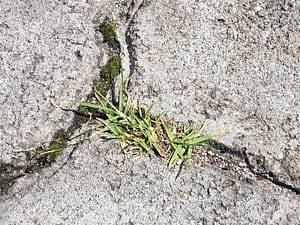 When I put a foot outside my house, I found on the street something too familiar, I found weeds and moss. This is something a lot of people, well practically everyone, tries to exterminate or pre

vent because they can be really destructing, “look bad”, moisturizes the structures and are a sign of bad care. The specie of weed in South America is called Sagina procumbens. This is a real “invasive” specie that can appear everywhere. But what they are good for? First of all, they are extremely adaptive, basically a place with moss or humid have probability to make them appear. They function as a habitat of little insects and as food of wild animals, unfortunately there is not too many studies of them, because they are really a thing that people what to stay away of. 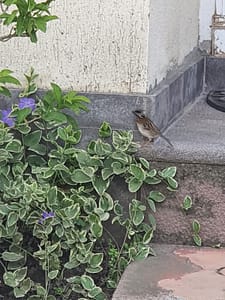 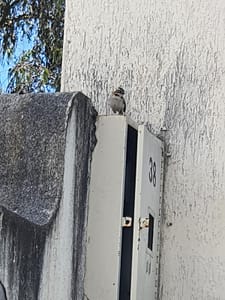 The Zonotrichia capensis or Chingolo is bird specie that we can find normally outside our houses in Quito, Carcelen. In summer, most of its diet see

ms to consist of insects, especially beetles, caterpillars, grasshoppers and spiders, among others. It also feeds on many seeds, especially weeds during the winter seeds can be very important in the diet. This is a bird even being a “invasive” specie, they are not normally exterminated just because they do not bother anyone, and they are cute. Apparently, the way of not being killed by humans in the city is being beautiful, cute and capable of flying.

I was walking through my neighborhood with my mother when we saw some pigeons, they were flying from one tree to another, they were cute and it is entertaining to feed then or just scare them. And when we stopped playing with them and entered to my house y saw a spider. One spider that was as small rice grain. My mother saw it too and her reaction was instantly trying to kill it. I tried to stop her, but she stood over the spider it was the end of it. She did not understand why I tried to stop her, “It is a disgusting spider” “There should be no insects in the house”. And I can understand that reaction, there is a general fear to little creatures like mouses, insects or arachnids because they are seen as plagues, something invasive that is only there to make damage to the house and us, something that is dangerous and disgusting.  But ironically pigeons are as dangerous as them because of the sickness they bring with them, but why was that not something dangerous, and disgusting? Is it on the cuteness? Because it does not attack people? It is because is a tiny dinosaur? Why?

I asked some friend of what they think when they see a bird, they said things like “Oh, a bird”, “Flying” or “Freedom”, and I realize the admiration we have to birds in our culture. And

then I asked about spiders, almost everyone said they were frightened of them, or they will kill it with no hesitation, a few say they just leaf them be. When I asked those who were scared, why they were afraid? It was because they are poisonous and dangerous or because they are ugly and disgusting. When I showed them the number of sicknesses that can a pigeon transmit to you, they could not believe it.

However, the conversation ended there, there was no more thing to say, the end of the conversation. The conclusion was the spiders and pigeons were dangerous and nothing is going to change. So, I wanted to see another perspective, I wanted to kwon what the pigeon and spider would think.

First, I started following the pigeons, a very hard work to do, they easily go away flying if approach or make some forceful movement. They only approach if I offer them some peanuts or bread, probably that is the only thing they are interested of humans. They fly from tree to tree, randomly pick something of the street. I wanted to know more, about what it thinks but is hard to know what a creature you cannot communicate thinks. I tried to find a nest, but I couldn’t. What I understand, at the end of the day, is that pigeons see us something to be frightened of or a food supply. They make their routine every day, wake of, search for food, make a nest and in the night sleep, it reminds me of us humans.

In the case of the spider, I followed all day one that I found. It went everywhere in my house. I am not sure if I followed that same one, sometimes it jumped and disappeared. I learn that this type of spider does not make a web. It searches for preys, or probably it was scaping from me. My father told me that the less intelligent spiders are the one that are dead, the intel

ligent spiders are the ones who now how to hide, that is the reason maybe I did not see the spider eat. The spider probably hides when it was eating because it is vulnerable. Following the spider, I ended in my room when I saw other one. They did not interact. I normally see spiders in my room so maybe they think is a good place to hide because I do not kill them, I just ignore them, but I never realized that they are maybe the reason that my house is not full of flies.

The same thing happened, I could not understand the arachnid. In the end, it felt as a waste of time. They do not have face that I could confront or study, or not one I could notice. I did not want to do a bast research of the habits of the creatures, I just wanted to see how they see their everyday. The only thing that I could get is that they have their routines as humans have it. Then, I realized that, like us, they use the city as they please to survive. They have found a way to live in this place and it is interesting. Like us, they found their secure places, avoid danger and part of their own system.

That does not mean that we do not have to do anything. It may be a way to create an ecosystem full of different species in the city. Noticing them and realizing the roll in it could make our relationship with other living beings could change. I do not think it would be a paradise, because everything in nature is not peace.