My house: a place where beasts are not allowed

It is actually funny because when I moved in back in 2012, we had a lot of beasts coming to our home, but nowadays it is really hard to find beasts in my surroundings. My house  grew, and with that we started to need a lot more services, like more  gardening almost twice a week and fumigation once a month. It is like they are trying to prevent that the beats come to our houses. But not only my set house grew, also the neighbourhood. Now you see many cars, many houses and now all the streets are being paved and there are several huge projects in mind and process.

But why we humans do not allowed this beasts or intruders in our homes?

Well we are scared of them (in the case of insects) and also we do not like to see them. It is like we think they are not meant to be there, they are  annoying.

I want to divide my house bestiaries story in four chapters: the spider in my kitchen, the plant that should not be here, the flying intruder (sadly I could not post the picture of the fly, but I’ll be as descriptive as I can), and the actual beasts. Let’s begin!

Spider in my kitchen

I found this little guy trying to escape from my mom. I rescued him telling her I need it for my project. I have never been scared from spiders, actually I found them interesting, especially because I am huge fan of greek mythology and there is a story about spiders: Arachne the master of weave. It is known that Arachne was punished by Atenea and transformed her into a spider, so it is believed that all of spiders are children of  the great Arachne, that is why spiders weave their webs. I know this may be not true, but it is a nice way of seeing this little creature, or well as I must call them this beasts. Manny humans, like my mom and my sister are afraid of Arachne’s children, why? Because they look terrible. This complain left me with a thought: what is actually appealing for the human eye? Are we appealing to them? The connotation that have spiders in our society are bad, even they are related to halloween and scary stories, but for them we are some other creature. They live their live and hope that we do not interrupt theirs. They lived where my house is built first, so they must have an space in this house or at least for me.

(Spider web in a plant and in a spotlight)

The plant that should not be here 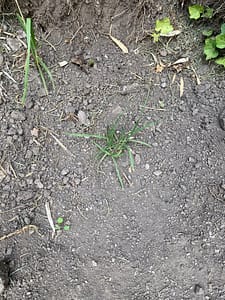 This little beast is considered a bad plant, that kills the actual ”nice and beautiful” plants. But is not true. This plant were here before the other ones. I just have two of them because the gardener took them away. Since this project began I told them to not kill my little plants (they already have names Cecilia and Cecilio). My mum thinks they will destroy our garden, but is not true, actually the other plants grew so much that they destroyed the pipe from our neighbour, that is a toxic plant. I remembered since I was a child that my parents told me that this hierba mala is a bad plant, a killing and destroying one. I saw it as a big enemy of nature, and I did not want it in my house or in the streets. But actually, we are the bad, killing and destroying ones; were are getting rid of this plant because as spiders we have a bad connotation of them. I think that is one of the problems, these kind of stories that are being told. They are simply generating bad feelings and concepts about some creatures in nature, that deserve a place in our city, because they  were here before. Our imaginary of city is what disrupts the relationship between nature and culture, generating as we already know the nature-culture binary.

Flies, they are not really that good looking, are they? They have this big eyes that can see anything with them, every movement so they can predict an attack from some human with pix trying to kill them. Well this was the case of the fly that wanted to come inside my house. In this quarantine my mum became a professional in killing flies; actually my sister and my mother compete with each other who haunts more flies and how many time take them. They both have their weapons or most commonly known as pix or insecticide. They are in a war with flies. My mother is a doctor, so she explained everything to us since we were little. Everything was dirty, but the most dirty things were poop and flies. Both are interconnected and she is right flies stand in poop every time and then stand in our food, kitchen, clothes, etc. I know they are dirty and everything, but that would mean that every single object is dirty because in some sense everything has contact with everything. Flies have a negative connotation and are known as something dirty. I guess they were here first, but I can really understand my mother’s point. It is a bit weird that I do not feel empathy for flies, but for every other animal I do have it. I still have not the answer, but it must have to do with my imaginary about them, for me they are useless and really dirty. Of course we humans yearn for a clean house and space, but actually we cannot have it, I think with this pandemia we have learn that. 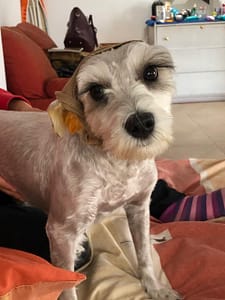 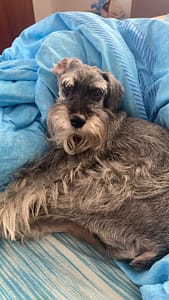 Let me introduce you to the actual beasts, my dogs Jazz and Blues. Both of them are schnauzer, and their breed is well known as hunters. Before we had Blues, many insects came to my house and made it their home. But since she got here, they started to disappear. Why? Well she tries to play with spiders (ends killing them), she eats flies, she scared every single being. She is actually like a cat, and she even do not allowed visitors in our house. In the other hand Jazz is abit of special dog, he is afraid of everything, so he respects the insects and of course he respects and is afraid of Blues. But he is the beast of flora, like Blues is of fauna. He has destroyed many plants in my garden, he likes to dig and once he took down my middle size bonsai of tangerine and also killed my babaco tree. I really doubt that they do it on purpose but it is like the story of the chihuahua and the coyote, they are actually outsiders but I care for them more. They are actually like my children, they are my little beasts. And as outsider they destroy what is ”natural or native” but so do we. It can be funny how outsider proclaim insider’s place to become theirs and than treat insiders as outsider. We are scared of the unknown or the unfamiliar, and dogs are very familiar with us. Some species are made to be with others and this is the case.