I gave myself the time to sit in my yard and pay attention to all the sounds I could hear. I’ve never done it before and for me it turned out to be a moment of peace, I really liked it. Most of the sounds I heard were those of the cars passing and a few whistles of birds. Similarly, I listened and felt the air constantly. At times it was unnoticed, but when I was concentrating, I realized it was still present. Its sound was continuous and very slight.

I represented the air with a low gray color, which goes unnoticed as the sound, but with its shape I wanted to represent its continuity and constancy. With the green color, I represented the plants, and the slight sound that emanates when the air moves them. Like the air, its line is thin, as you can only hear its sound paying close attention. The red color represents the sound of the horn of the carriages, which was loud but fast, immediate and was only heard for moments. On the other hand, I represented the sound birds with pink, through which I wanted to represent these sounds as distant. Similarly, I used their lines change thickness to show how birdsong is sometimes stronger and sometimes lower. Finally, I represented the sound of the street, with purple color. Similarly, the shape of its line represents continuity, in order to demonstrate its constancy and the change in the thickness of its line shows how sometimes this sound is louder, but it can also go unnoticed.

All these sounds I placed in the same space in order to demonstrate the interaction between them and as within a small place, different sounds develop that many times we do not hear because we do not give them due attention. These sounds, as well as they can go unnoticed, can also generate a great impact, either in ourselves, or in other living beings. 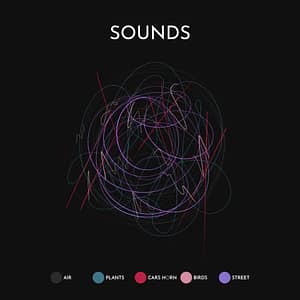