Going for a walk and focusing only on sounds has been one of the most interesting experiences I’ve ever had. Usually when I go for a walk or run I put on hearing aids and enter my world so as not to hear the sound of cars or sounds that alter tranquility, however, this time goes for a walk in the space where more natural things had such as: a dirt road, trees to my burning, animals, plants and a lot of nature.

And I realized that it’s better to be in a place where a lot of animal sounds, from the wind, from the trees than to be with hearing aids listening to music. This activity helped me to notice more the space in which we live that is imperfect as I represent it in my drawing, the whole space is perfectly imperfect; that is why I try to do so in my drawing where I represent the soft and pleasant sound waves as with a rounder shape and the louder sounds like that of a cart or some strange sound with waves drawn on peaks representing in this way how loud and alterable the environment becomes.

Sounds are at every moment, in different tones and volumes. Therefore, to be more specific locate the word “sounds” as those imperfect  natural sounds mixed with human-produced sounds such as that of the car, a motorcycle or sounds that alter the environment. This activity was interesting to understand beyond what it’s just like to hear a bird singing or the sound of the river. It was rather to go further to notice and notice what we have around us, to try to investigate where that sound comes from or what species sings like this or how loud or soft several sounds can become.

Understanding our surroundings and everything that an environment encompasses is one of the most incredible ways to know your own environment, research and get acquainted with everything around you. 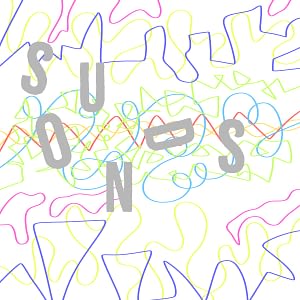