Sometime ago I found two dying bees in different places in just one week. And then found two more the following week. Luckily for me, at a young age I lost my loathe/disgust for insects (that is common to a lot of humans) and became curious about and fond of them. So, when I found these bees and gave them water with sugar and they died anyway, it really really broke my heart. Like, almost-started-crying-in-the-middle-of-a-cafeteria broke my heart. Besides my personal respect and appreciation for insects, it is widely known that bees are important; and that they dying and their populations decreasing is a sign of alarm to the entire biosphere. But especially to humans. No bees, no food, right? Bees alone are responsible for two thirds of pollination, which allows us to grow food. As many of us know the decrease in bees population is due to climate change, habitat loss, toxic pesticides, among other causes.

What made it that much more tragic for me was my admiration for bees. I think that there is something beautiful, awe- inspiring and incredibly humble in the silent and discrete ways in which insects perform great volumes of work; and how this almost unnoticed work plays a fundamental role in making the world as we know it (from a material point of view). I also love the idea of how different forms of life organize, form alliances and thrive in places without direct human-intervention (namely abandoned or uninhabited by humans), that authors like Anna Tsing point out in their work. I also find that in this type of places it becomes evident that the concept of ‘‘care’’ (as in organizing to sustain and maintain life) is not a sign of human superiority, let alone exclusive to human beings. Instead, these places make it clear that communities are made up by non-human individuals and that there are many (multi-species) stories to be told. In fact, in my neighborhood there are plenty of abandoned places where the grass grows tall, branches grow in all directions and many animals make their home in.

But far from approaching an idea of leaving something untouched from a misanthropic point of view, what interests me from this kind of places is the opportunity to build a multi-species community in which we care for each other. Or perhaps become an active part of- instead of ‘‘build’’. Maybe it is easy to forget that we, humans, are animals too. And maybe thinking in this way can make the idea of manipulating, changing or affecting the ”natural” environment more acceptable. Necessary, even. Climate change is the result of human activity. Yes. But it is also the result from the work and influence of all the other species and material factors that make it still possible to sustain life on Earth; and that also affect climate. We cannot deny our role in affecting its state and in the same way we cannot pretend to leave the environment untouched. What we can change is how conscious we become in the ways we are part of simple and complex material and inter-species chains of action that have an effect on the environment as a result. And in this way, we can be able to take action directed towards a specific goal (fitted to our preoccupations).

I wanted to become part of these interspecies webs of care and community by being an active subject in caring and getting involved. So with the intention to provide relief for the extreme sunny days* that are common to this area, I thought about making bee’s drinking fountains. Maybe this fountains could really help thirsty bees and stop them from dying of dehydration. Only I wasn’t looking to place them in a human-controlled environment such as a garden. But instead thought of designing these pieces in a way that they may work by themselves collecting water from the rain. They were made to be placed in the many abandoned places on my apple, were flowers grow here and there and surely that attracts bees. And hopefully they would find them useful and it would help them.

I made two versions of the piece. One was small and took after the shape of a bowl and of a flower. The bowl, in the human world I come from, signifies community and the communion that mealtime has meant for all cultures throughout human history. It means union, peace and sometimes being grateful and showing appreciation. It also means nurture and care. And the flower bit had to do with conceptually the piece being designed especially for bees. I made it small enough so that it could collect enough water to remain after some evaporation, but not as much that it was a drowning hazard for bees and other insects. I did a little research and found that bees are attracted to blue and violet colors the most.

The second version of the piece was bigger and had a thick stem in which it contained water that flowed down into its curled petals. The petals contained spaces small enough for the bees to drink water (again, without the drowning hazard) and at the same time they stopped water from flowing and evacuating the stem all at once. I mapped all of the abandoned places in my apple and made enough pieces to be placed in all of the places. Finally, I placed them.

Of course this won’t solve the problem of bee population massive decrease. But I think that gestures like this are important as they are generated from an amplification of whom we consider subjects that matter; as well as becoming active in thought and action for possible futures from multi-species perspectives. I hope to get involved in more interspecies projects in the future. And I also hope that individuals from species other than bees benefited from these pieces. 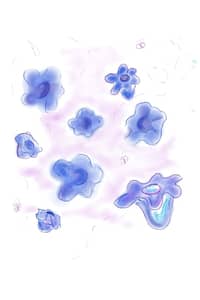 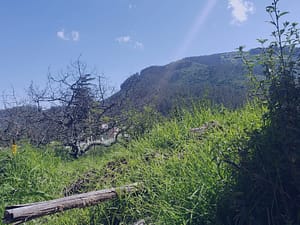 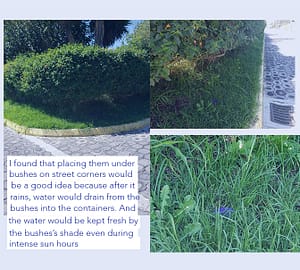 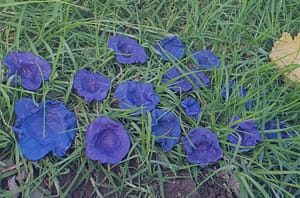 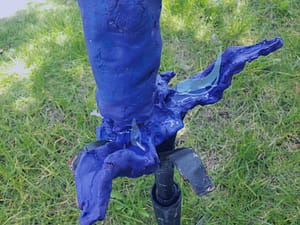 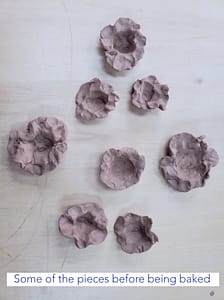 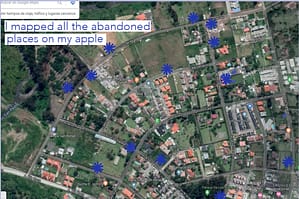