Homes, gardens, backyards, or parks. They all serve as a home for a wide variety species, and we often tend to ignore the role each one plays for the stability and said habitat. It is a very known fact that humans are one the biggest players when it comes to change, but if you stop to observe, you will figure out you are not all alone in this process, and that there are hundreds of other beings that actively share this space with you. Some of this beings may make your life easier. Some will probably will make it worse. But you have to know they are all there for a reason. That’s why I have moved myself into writing about the unseen creatures that live around us, those animals and plants that inhabit our neighborhoods but are considered a given. In order to do this, I have set myself into journey of exploration, looking out for many forms of life that I have ignored throughout the years, whose roles in nature are still unknown to me.

That being said, identifying this wide variety of species is no small task, but it is important that you know whom you are sharing a home with, and most importantly how to treat them. ‘Lets start simple’ I said, by focusing on wild animals only. But then a new question raised; how am I supposed to keep a record of this? And another; How will I remember all of this? There has to be a way to represent all this information and give it an ease of access to anyone that may want to look at it. Then it crossed my mind, ‘a bestiary might work’. And with this pseudo solution at hand, I throwed myself and prepared a small list of the species that I have found in my near vicinity as a first attempt to construct this guide, which you may feel free to examine the right below.

This as I said previously, was my first attempt. But I ended learning so much of it, so many species that I have seen but have ignored now have a role to play in the neighborhood. And this was in a near-vicinity type of exploration so, ‘what other things are out there?’ I questioned. If I expand upon the subject, maybe someone in the near future may take this as an example and take the initiative to find out about the life that surrounds you on a daily basis. But, have I really learned something about the ‘wild’? Do I comprehend it better now? This definitely requires more study, more dedication on my part and a bigger sense of consciousness to form a real result.

That being said, it is not only animals that can be part of a bestiary, but plants as well. And this is a key element because people tend to forget that plants are also living beings that play a huge part on the way we live. They may not have the same physical traits we often look out for when identifying other people or animals, but they are alive, just like us. Some we have a kinship of sorts, and we opt to take care of them, and others provide nourishment. Sometimes it is both. But while this encompasses the global truth, it still misses a face-to-face interaction, a way for us to relate to them and understand their place in our vicinity and keep them from being mere categories. And I make this statement thinking on the role this species have in the present, and the one they could have in the far future. Previously I talked about inspiring others to do the same I am doing. But how can I convince others this is worth doing? Simple answer: narrative. Everyone is bound to listen to a good story, specially if it is bound to real life experiences. 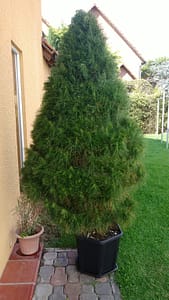 Did you see that tree I posted? Let me tell you the story of this tree. Just before Christmas season my mother bought a pine tree so that we may use it on the holidays. She bought it because it has been a while since we had a Christmas tree to decorate. But what will follow after Christmas? Why? Before arriving home, this was just another tree living in Llano Chico minding its own business when BAM!, mother swoops in and says ‘I want that one’, and then a man with a mattock comes over, digs the tree and loads it up into your car, ready for you to take it wherever you want.  I understand she would want to replant it in the garden but, is it the right call? Wouldn´t it disrupt the regular flow of species that live nearby? Is it right to use the tree is such a manner? These are the sort of questions that pop up in my mind when I see these new holiday addition, and it makes you wonder what other relations we have with other species around, and if we are disrupting their natural cycle by interacting with them. This tree in particular will fulfill its role of pleasing us, but after that its fate is uncertain. We might replant it, yes, but what guarantees it will remain there?, after all we took if from its birthplace so we can use to to satisfy our needs. It makes you wonder what could happen when you stop looking.

In case you read the bestiary, one week after there was another huge storm, and guess who decided to stop by:

Of course I mean it in a figurative way. Its not like there was a swarm of frogs in the kitchen, but I could at least hear a few of them near the house. That’s good and it makes you wonder where did they came from. Why did they come back? Isn’t human sediments not apt for them? Imagine being one of these little amphibians, having the habitat around you being brought down and replaced with cold, sterile pavement. Imagine having to leave your home because your neighborhood got consumed by beings 50 times the size of you. That’s some horror flick stuff, I’m’ telling you. Talking with my parents, around 20 years ago or so, everything near the valleys of Quito, the place we live now, where prairies or forests. They were the perfect environment for frogs to thrive. It was humid, desolate, colder, wilder, but for rocket frogs that’s home. Now with these constant rains and weather changes, maybe this habitat humans have claimed to be for themselves is now being subverted, the environment is again now more welcoming and older species are beginning to claim their own space.

All of this happened in two weeks. All changes, recollections, analysis, and experiences. And this is just scraping the top of the iceberg. There are hundreds if not thousands of species that still await to be understood, living in our backyards, doing who knows how many functions in this complex network that is our habitat.