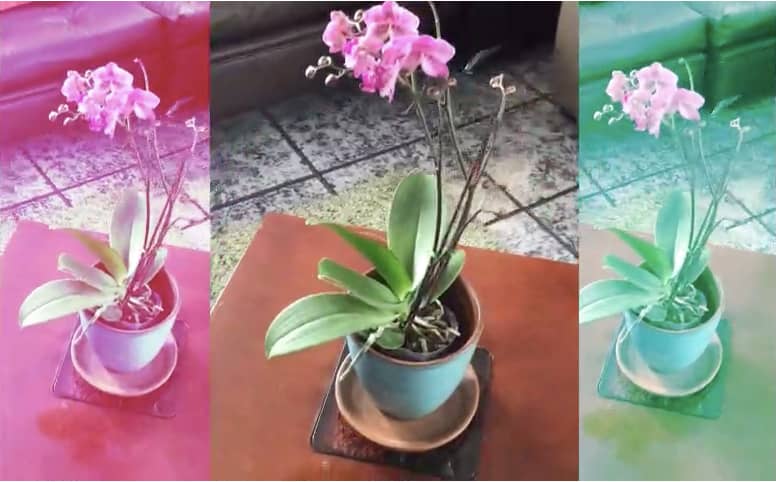 It is the year 4020 AD, Cyberarcheologists have found the remnants of this orchid and pot. Drs. Eliana Vallejo, Mateo Erazo and Martín Cordova tell us about their experience.

So we found out about this new lifeform inside of a container. This colourful being denominated plant was growing inside of a house back in Earth at about 2020. The containers seems to have two layers, one that supports the roots of the plant, some soil and humidity. This very soft layer is plastic and it seems to be in its medium stage of degradation after 2000 thousand years, it should hold about thousand more. US in 1954 with a companies as the Summit Plastic Company in Ontario were the first countries to sell plastic pots. of It is transparent and it seems to be so the light that enters the plant heats up a little bit the plant so it’s in a specific temperature and grows correctly. For about ten thousand years these containers called pots have been used to give humans the ability to transport plants form their natural habitats into their houses, for aesthetic, cultural and religious regions. In this layer the reason for it existence is for sustenance, and the second layer is for aesthetic purposes. It has a glassy blue-green surface and it’s made from ceramic. This was the first material used for the construction of pots in Turkey around 6500 BC. The one that contains the flower is actually one made from Cuenca, a city in Ecuador. The ceramic was one of

many factories built pots, which were man made. Who were those sculptors that built this pot?

The object by itself doesn’t seem to be special in and of itself;  just another pot and plant. But it symbolizes society and it’s desire to bring back nature into our daily lives as human and the complex relationships of consumerism, creating new ecosystems and status and privilege between humans, plants and pots. Humans were at the height of the anthropocene when this plant was considered a luxury item and this sense of pride into owning one of these specimens that falls into the category of exotic plants. Also it wasn’t a native plant from Ecuador as native species were prohibited for trade in that time. The value for having plants in your home was high as well as the demand but native plants aren’t considered commons. These plants act as heritage of our country and the cultures and other non-human organisms or things that existed in that time. So going back to the item, even though it may be consumerism isn’t only consumerism, but also a relationship, intent of preservation, and this presence in space-time.

How was the relationship between the owner, the pot-orchid and the environment, this place was in the living room near open windows so the orchid can have breeze coming it’s way. How many times did it need water, sunlight, what kind of air was around it. How did the human or group of humans relate with the pot-orchid. Humans get to chose where the pot-plant stays in a room but the pot-plant responds without language but by physicality. In reality you can’t chose any place as the plant has its specific needs as mentioned before to survive. The basic need of holding a live plant inside is done by the pot. The biggest factor is actually the care-taking of the plant in a prolonged; this becomes the human’s responsibility in return of him taking something from out of nature, or outside the concrete jungle we’ve built ourselves in.

Then, how is this consumerism?

This plant was probably bought from an orchid store so the consumer/owner didn’t have the experience of taking the plant out of its ecosystem. Who was that human that did this in the first place, as it may not even be the owner of the store? The pot was bought in a store in Cuenca and the Orchid come from a nursery garden in Sangolqui, but the real origin of this species of plant is traced back to the Philippines, Asia and Australia. Then they are brought to this home where it now stays. Transportation through car was involved in bringing the pot as well as the orchid. The orchid consumes water in a small but constant rate so its carbon footprint increases at a controlled rate.

Preservation comes into play with this plant. The constant effort to keep it flowered, clean, with light, breeze and distant it from its eventual death (in some cases) where its thrown to the trash. But in the meantime the plant invites the human to maintain it. With the constant deforestation that happened in those years, people that could afford bringing species inside the house were protecting them from being destroyed. Also the pot is placed at a specific place where it wasn’t compromised. So that is another consideration the human followed in benefit of the orchid-pot. The material of the pot is hard but breaks easily if thrown and if it were destroyed, it would crush the plant contained inside as well, or at least folding it.

Presence plays a big part in our lives as everything that exists in our surroundings is occupying a space-time. We as humans enjoy having plants around, Muslims thought of heaven as a garden and brought plants from all Europe and Asia. The desire to have plants near as Queen Hatshepsut in Egypt made her engrave the plants in her tombs hieroglyphs.  The presence of plants is not only recognized and cared for inside of our homes. But paradoxically, the weeds outside at our garden aren’t as important or as pretty and must be taken out to maintain this scenery, fabricated by us and for us, not the non-humans interest.

In this case, the object we observe invites us to reflect on how our relationship with nature has been built. How we perceive the plants around us, and even how we could be perceived by them. A flowerpot is a space designed to be inhabited by a living being, one that breathes and feels as much as you do. Therefore, we could consider this orchid in the middle of the room as a companion, an equal. One that has ended is this space by our actions and that must be constantly taken care of and considered. Orchid in its ceramic pot can indeed be seen as a merely aesthetic being. However, it is here that the object challenges the boundaries between the human and non-human worlds. We cannot deny that it is part of the home, that it occupies a designated physical space, though, and planned for it. A space that we as human beings assign to it and for which we are responsible. On the one hand, the human being could bring an orchid, place it in a pot and forget about it. It will look good for a while and as neglect manifests itself, it will die. But on the other hand and more surely, the objective of having a plant in the home is to take care of it, each act directed towards this being is an act of care, an act of observing and learning from a being who does not speak, who does not blink, who does not smile or cry, but reacts in its way, proving to us that exists, lives and feels, and that in the end that space is also its home.