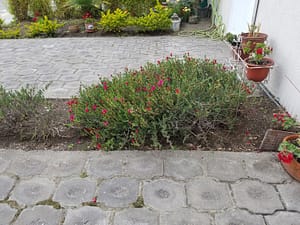 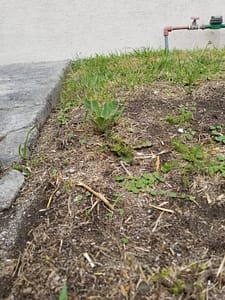 This week helped a lot to be able to analyze my environment, especially focusing on plants and the effects they have around me.
For example, in my case, I live north of the city where it is still usual to see green spaces or not as urbanized as in the center of the city, so it is interesting to find in these flat lands or vacant lands, certain plants that are considers weeds but they themselves have a role in nature and landscapes.
When I just went outside my house I found in my garage certain small plants that grew on the asphalt, a mixture of environments, both urbanity and nature, it is here that you reflect on one of the topics previously discussed in class, about how the Nature refuses to be eliminated, since it is its true root, we are the invaders of the environment, nature has always been here and they converge with the new species that have been developing.
Next to my garage there is also a mini garden composed of several plants, some like cedar, other orchids that not only contribute to human consumption but also to the soil and the aesthetics of the place, but above all the most important thing to know about this type of plants and different species in nature, it is for me to denote the composition and richness of the environment in which I live.
Perhaps before I did not start to analyze these types of situations but little by little I have been able to develop more critical and analytical thinking about the environment that surrounds us and about caring for the environment to be able to contrast the actions of human beings on the natural.

Letter to my natural environment

I never took the time to get to know them, I never gave myself the space to locate them, but time has shown me that it is never too late to take care of them and know the importance of their existence.

Unnoticed they go through the day to day, people do not look at them, they just ignore them, without feeling them one day they treasure them but fundamental is to know the environment where we had to grow since without nature we would have no where to exist.

Life is this intense, indescribable and extensive journey that we rarely understand but that many of us yearn for. We do not believe that nature is gradually ending it, but its existence is life.