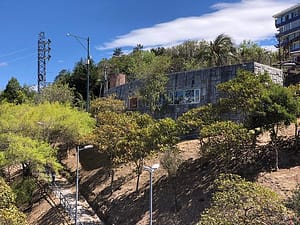 The park near my house curiously has an atractive that is one of the most visited viewpoints in Quito. It is the viewpoint of Guapulo. Below it is the park that connects the neighborhood of Guapulo with the city of Quito (Gonzales Suarez).

As a park is a great place for recreation, this one in particular has several places where you can exercise, despite being a small park is very busy, unfortunately the park by this concurrence of human entities have caused it to be neglected and deteriorate.

The truth is that I do not find sense in why humans do not take care of it, since this park is the union of two emblematic neighborhoods of Quito, but even more it is the home of many non-human entities. It is the home of some trees and plants. Of several birds and certain cats. It is also the sample of the little green space left in these neighborhoods.

This park is part of me but it is not my home. This park is a part of my emotions and accompanies me on my way down to get the bus. It is my escape from the city, in the city itself. It is my happiness but at the same time my pain to see how it is deteriorating. Now I wonder what would be the destiny of the park…

Español
We use cookies to ensure that we give you the best experience on our website. If you continue to use this site we will assume that you are happy with it.OkPrivacy policy