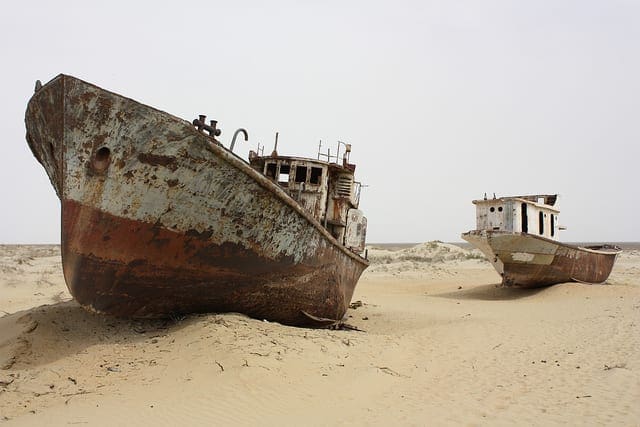 Do you know what the Aral Sea is?

Many people don’t; I didn’t until just last week, but it’s one of those things, I think, that once you learn about them, they affect your perfection of the entire world. Once just a very large lake in what is now the border between Kazakhstan and Uzbekistan, sometime during the 1960s, some genius in the Soviet Union had the idea of diverting not one, but both of the rivers that fed into the Aral Sea in order to use the water to irrigate the land around it and produce cotton. Yes, cotton. The rivers that fed the lake having been diverted, the inevitable happened, and now the Aral Sea, still called that, is not a sea at all, but a bleak, muddy continuation of the vast Kazakh steppe. Trying to make the best out of the environmental catastrophe, it is now one of Kazakhstan’s main tourist attractions, the appeal for visitors being twofold—on the one hand, a sort of awestruck contemplation of  the tragedy itself, and on the other hand, the fun of wandering through a desert to suddenly find rusted shipwrecks lying in the sand, miles from any water.

When I read about this last week, it provoked two things in me—the one was an overpowering, irresistible desire to go to Kazakhstan immediately and see the ruins in the Aral Sea, and the other, an uncanny feeling, as I stepped out to the streets, still half-deserted because of the quarantine; a feeling that everything I was looking at were ruins already, that I was some kind of visitor from the future, gazing with a sad awe at the magnificent hubris of our civilization; at the scale of our ambitions, but also their blindness.

I have always loved ruins, abandoned places. A friend of mine, a tagger, knows this, and when I lived in the States, he always used to ask me to take him to whatever cool abandoned place I had found lately so he could graffiti the sides with his exquisite street calligraphy and political messages. I took him one day to the Woolen Mills neighborhood of Charlottesville, Virginia, where, in the backwoods just past the city limits, there lie the buildings that give the area its name: immense, abandoned red brick factories with towering smokestacks, once used to process wool. Entering this beautiful, eerie place, we spent some time gazing at the PRIVATE PROPERTY signs that seemed to paper every tree around the abandoned mill. We laughed at their futility, at the ferocity with which someone had staked their claim to this piece of land, affirming, with each sign, that it belonged to them, and them alone—now, nothing but the markings dead men who had tried to possess that which no one now possesses, and which no one ever really did; it was all just an illusion.

It strikes me, now that all anyone can seem to talk about is what they’re going to do after the quarantine is over, that as we visualize our futures, we should not only think about the people we will see, the places we will visit and the things that we will do, but also about what we will leave behind. We should stop, for a moment, to think about the ruins of the houses we inhabit, the rotting of the bodies we call ours; we should stop, for a moment, and remember that all we think we own, we do not.