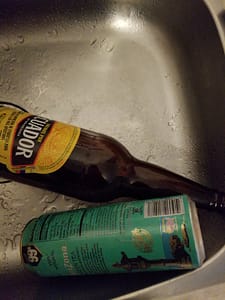 It is generally known that one of the products with the most consumption globally is beer and beverages, in my case I am a frequent consumer of green tea, during the pandemic beer in particular was affected, both in its production and in its At the most, its entire commercial chain was affected by being a social drink, since quarantine and mobility restriction measures were put in place on a global level.  Global consumption has stagnated somewhat in recent years. Traditional markets like North America have not improved their numbers, although other developed markets have. Latin America now accounts for 17% of global consumption and demand there has grown at a compound annual rate Despite this, it is one of the industries that today has the highest invoice and that has the most effects within global society and its environment, by producing en masse its influence also falls on its packaging, usually glass, plastic or aluminum cans.

Sometimes we are nothing more than instruments of consumption that we do not even ask ourselves about the process and effects that each product we use brings, in my case I really enjoy these two drinks which if I accept that it creates a dependency to a certain point and develops a blindness about of its background. With the passing of time we have lost the courage to remain human beings, starting a metamorphosis in which we have become another good, an object, the use of something else.

The current society that the essence of life is express, since like the usual or more common objects in my trash, such as this bottle of beer or my can of green tea, the lack of critical thinking in our environment is counterproductive for ourselves as a species, the disinterest of not knowing where they come from and where they are going, can converge in our sense of life as human beings.

It is important to make changes, many think that after this pandemic and everything we have experienced during it we will become individuals more aware of our role on the planet, about its care, personally I think that our nature will rule over reason but it is never too much to analyze and be self-critical for our own good in favor of individual and collective development